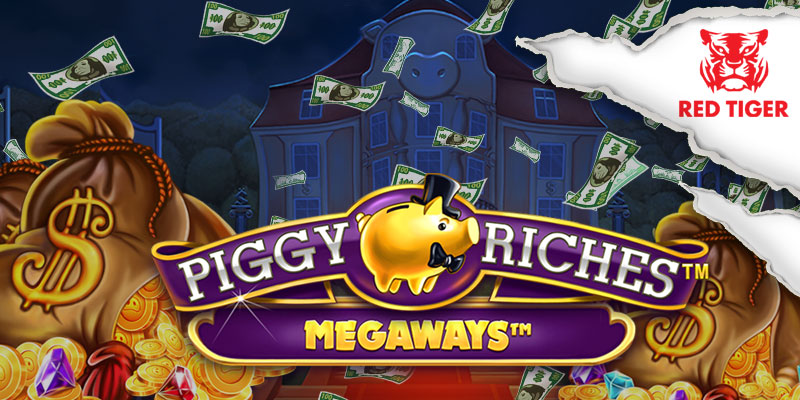 No theme is too quirky to qualify as the inspiration for a fun-filled online pokies creation. Just one quick glance at a recent release from Red Tiger Piggy Riches™ MegaWays™, proves this to be true. In fact, unexpected and original themes seem to be popular with online casino players, not just in New Zealand, but the whole world over. For those looking for an entertaining online slots title that stands out from the crowd for all the right reasons, this one warrants a closer look here at Royal Vegas. Upon neared inspection, players will also find that the swine-inspired casino game’s refined line-up of features and ample potential winning opportunities aren’t anything to snort at either. In fact, there’s a lot to look forward to, especially its 117,649 MegaWays™ to potentially win. But more on that later…

The online casino game’s name might seem familiar as Red Tiger’s Piggy Riches™ MegaWays™ is actually a newer incarnation of NetEnt’s original hit release, Piggy Riches™. This time around, it boasts the popular MegaWays™ mechanic, providing a truckload of potential winning ways. The one thing that ties these two titles together is, of course, the theme. And what could be more fun than living it up with the most affluent swine couple in the neighbourhood: the dapper Gentleman Pig and his lovely Lady Pig. The filthy rich twosome resides in a massive mansion, complete with landscaped gardens, piggy fountains and a red carpet leading up to their front door. And with gold and diamond encrusted symbols and a grand ol’ soundtrack to add to the fanfare, this couple knows how to make their presence felt on the reels of their very own online slots title.

A quick scroll to the online slot’s paytable reveals the symbols and their accompanying potential pay wins. At the lower end are the expected 10, J, Q, K and A card values, encrusted with jewels to echo the theme. Adding to this are the high value symbols, displayed against what appears to be Monopoly money, including a stuffed pink piggy bank, a purple purse brimming with cash, car keys, a gold bank card and a bag of gold and gems. You’ll need 3 or more of these symbols to create a winning combination. The only exception? The bag of treasure, which requires only 2 symbols, yet holds the biggest payout promise of 20 times the stake, should 6 of a kind appear on the reels in a potentially winning combo. Not surprising is that Gentleman Pig acts as the Wild and Lady Pig as the Scatter.

This brings us to the casino game’s main attraction, its potentially rewarding MegaWays™ feature, created by Big Time Gaming. How does it work? First one needs to look at the reel-row layout of the game. Unlike the regular online pokies set-up, Piggy Riches™ MegaWays™ provides a game grid containing a total of 6 reels. But since up to 7 symbols can appear within each reel, the game doesn’t have a fixed number of rows. This means that depending on the number of symbols that land after every spin, the number of winning ways changes every time. And when the max 7 symbols appear on all 7 reels, players get to enjoy the max amount of 117,649 ways to win, which could result in wins of just over 10,000 times the stake. After a win, the cascading symbols mechanic removes all winning symbols from the screen, allowing new ones to drop into their place and possibly create another winning result. This makes it possible for multiple wins to result from just one spin.

Online casino players will certainly appreciate the appearance of the Gentleman and Lady Pig symbols on the reels. As mentioned, the Gentleman Pig symbol is the Wild, but also turns into a Mega Wild when it lands, covering an entire reel and adding a Multiplier value of up to 7x to a win. A total of up to 3 Mega Wilds can land simultaneously, at which time their Multipliers are combined for a boosted win result. In turn, when 3 Lady Pig Scatters land anywhere on the reels, she’ll trigger the Free Spins feature, which kicks off with a spin on the Free Spins Wheel. When spun, the wheel will reveal the number of Free Spins and accompanying Multiplier the player will get to enjoy. Up to 22 Free Spins and a Multiplier value of up to 10x can be achieved. What’s more, during the Free Spins round, each potentially winning combo will increase the Multiplier value by +1x.

Piggy Riches™ MegaWays™ is just one of many engaging casino games that has come from Red Tiger Gaming’s arsenal.  Established in 2014, the company has released a plethora of mostly online pokies for both online and mobile casino play. What makes their games so likeable is the perfect combination of entertainment and playability they create via their varied themes, vivid graphics and immersive in-game features. A quick look behind the scenes reveals that it takes a team of innovators to achieve their goals – from gambling experts and mathematicians to graphic designers and software developers. And the results, can be seen in the Red Tiger games at Royal Vegas.